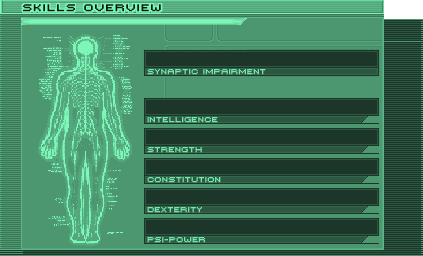 INTELLIGENCE
The skill Intelligence governs the skills requiring a certain amount of brainpower. Intelligence is of great importance for PSI Monks, Hackers, Constructors and similar professions.

STRENGTH
This skill is particularly important for combat and the ability to carry heavy loads.

CONSTITUTION
Constituion is equally important for all Runners. The Subskills mostly affect the health and resistance of a character.

PSI-POWER
Psychic Power is the main attribute for PSI Monks. Without it, they wouldn't be able to use their mighty PSI modules. The PSI modules are separated into aggressive and passive modules.